We Provide a Yard Overhaul

A few weeks ago we got a call to provide a quote for some serious backyard work. First, the homeowner wanted us to put in a retaining wall that would end up containing a large portion of a paver patio. We let the homeowner know that we provide complimentary consultations and quotes for all of our work as a concrete contractor in Savage, and we set an appointment to meet with the homeowner the following morning.

The retaining wall was scheduled to be built

Our crew arrived at the home and started getting the yard prepped and ready for the paver patio and retaining wall. Our crew first started installing the paver patio with the stones that the couple had selected. Each stone was carefully laid into place to create the patio that they had requested. The crew returned the following day and started working on installing the retaining wall. 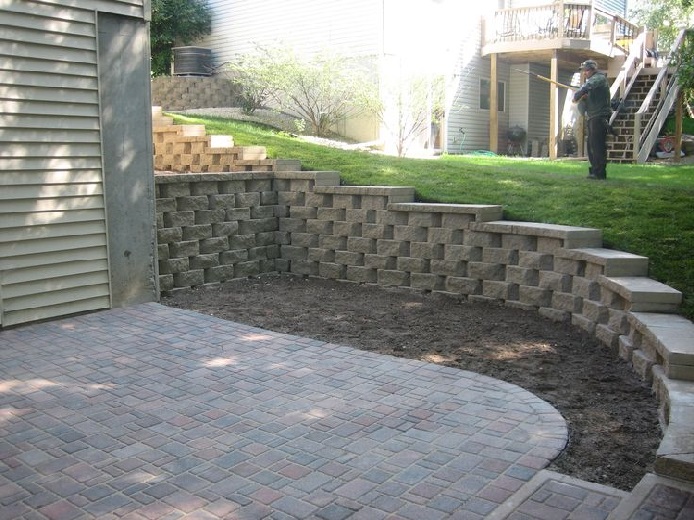 The retaining wall was built using the shapes and colored stones to match the patio. The crew worked all day long, then returned each day to get this project completed on time for the customers. On the last day, the crew nearly had the retaining wall completed when they arrived, and they worked nonstop until it was completed.

The crew was even impressed at the finished project. We were able to get the wall installed in just under one workweek, and the rest of it came pretty easily after that. The young homeowners were ecstatic when they see their backyard. They both said that it looked better than they could have imagined. They both agreed that they were very happy that they decided to go with Concrete Excellence for their Savage concrete contractor because we went that extra mile to make sure each stone and paver were put into place correctly.

The crew let the customers know that their retaining wall and patio pavers were easy to maintain as they may just have to sweep the dust and dirt off or spray them down with the garden hose. The couple already had plans to add a barbecue grill and outdoor pit in the patio area and they said this was the best looking patio that they had ever seen and the retaining wall just added the finishing touch to define their outdoor entertaining area that they had wanted in their backyard. They thanked the crew over and over, and our crew was pleased to have two more happy customers.